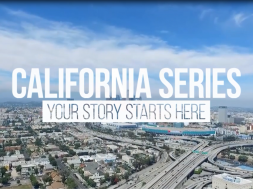 What do you imagine when you think of California?

Do you see palm trees along broad streets or blue waves lapping across the sun streaked shore of one of the many beaches. Maybe long roads and bustling freeways, the skyscrapers or the urban jungle of Los Angeles, one of the worlds most iconic cities. Maybe you think of Hollywood hills or Beverly Hills, West side rap or downtown rock.

California Series is a new special edition line of equipment and clothing which has been inspired by REVGEAR’s 20th Anniversary but the project evolved in so many directions that it has almost become a movement within the brand itself.

“So alongside the celebrations for the 20th Anniversary we thought we’d like to do something a little special which encapsulates the California scene.  We have so many new lines, updates and amazing products ready for 2017 we decided that California Series had to be more than a special edition it had to be a celebration itself so we are producing a series of videos and press releases that feature the new generation of Coaches, Fighters and everyday martial artists who rely on REVGEAR equipment everyday. Its especially true in LA where Revgear are based that everyone really does have a story but really in Martial Arts its a journey where no matter where you are from you will feel that connection and we know a whole generation of people many of whom Revgear is new to will also feel included in our brand”

REVGEAR Sports has always been a Californian brand but we felt it was the right time to really emphasize this fact and we know from the reaction the brand has had recently in the UK and Europe that the connection with the sunshine state is always well received. Paul Reavlin; Revgear President