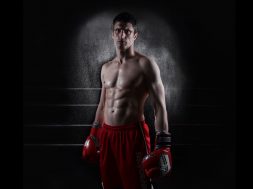 #IAMREVGEAR is a new video series following the people who make REVGEAR Sports what it is…The Athletes, Coaches, Fighters, Customers, Employees…..in fact everyone who contributes to what the brand is today.

In the first of the #IAMREVGEAR series we do a tribute to the late, great Muhammad Ali 1942 – 2016 who stood for more than just his achievements in Boxing but was an inspiration for generations of young people across the world and with the aid of currently ranked UK#1 80kg Muay Thai Fighter Juan Cerventes we explore the famous “Behind the lines” quote:

The fight is won or lost far away from witnesses – behind the lines, in the gym, and out there on the road, long before I dance under those lights

Juan Cerventes, an Englishman but of Mexican descent has been working with REVGEAR in Europe for just under a year now and has recently moved over from A Class Muay Thai to fighting K1 kickboxing rules for the Dutch Enfusion show.  The Video was shot exclusively at Northern Kings Gym based in Newcastle Upon Tyne (UK) where Juan trains under the watchful eye of his coach Craig Jose.