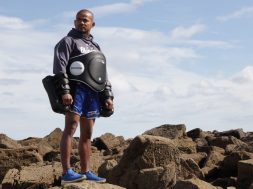 A chance encounter on a windy British beach led to one of the world’s greatest Muay Thai Coaches, Tanunchai Rachadech (known as Mac to his friends) joining with team Revgear. Mac gave his own unique seal of approval to the brand new Revgear Muay Thai Boxing Collection. A truly authentic Muay Thai equipment that’s made in Bangkok, Thailand.

“The new Thai range is a very good, very modern style for Muay Thai” Mac said. “I also like the lighter pads with one arm strap which are good if you need to hold for many rounds. The Revgear brand has very high quality”.

It was a great day and photo shoot on Tynemouth Long Sands. Mac had ample time to check out the new range of Revgear Thai pads, belly pad, shin guards and gloves with former kickboxing champion & BJJ black belt Pete Irving. The Muay Thai master was happy to give the new range a solid thumbs up, adding he was impressed with both the quality and style of the equipment.

Like many Muay Thai fighters, Mac started the sport at the early age of ten years old. He developed his Muay Thai boxing skills in one of the many camps in Southern Thailand. Mac competed in over fifty professional Thai Boxing bouts before deciding to concentrate fully on his coaching career. His extensive experience includes founding and managing a stadium in South Thailand, promoting fights at Lamai stadium Koh Samui, and both coaching and managing fighters around the world.

To many, Mac is better known as “Mac Fairtex” due to his most famous position as head trainer at the Fairtex Gym in Pattaya, the Phillipines, and Japan. There he works with world-renowned fighters such as Yodsanklai Fairtex.

After having worked in Japan, the Philippines, and Hong Kong for seven years, Mac moved to England with his wife and settled in the picturesque North East Seaside town of Tynemouth. It wasn’t long before a chance meeting on the famous Tynemouth Long Sands with local BJJ black belt Pete Irving led to Mac once again picking up the pads to begin teaching the art of 8 limbs in the North East UK capitol of Newcastle Upon Tyne. We’re glad he did. It’s always great when legends of the sport give back through coaching and training. And when legends help us out with killer photo shoots on the beach. Thanks Mac!

To view the new Revgear Muay Thai collection that Mac is so high on, go to Revgear.com or Revgeareurope.co.uk.