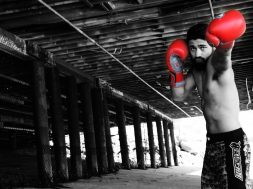 The Revgear S3 Boxing Glove is the evolution of the hugely popular Sentinel Boxing Glove –  combining premium quality leather of the type usually seen on gloves at more than twice the price.  The Revgear S3 features an ultra comfortable hand compartment with a new slimmer profile; a combination of layered foam padding; a gel injection mold providing the user some of the best hand protection in the business; as well as protection afforded along the inner side of the glove with long wrist support.  The REVGEAR S3 takes many of the best elements of its predecessors as well as nodding in homage to some of the best boxing gloves made over the last 20 years to produce something both new and individual perfect for Boxers, Kick Boxers or MMA Fighters needing a top quality sparring glove.

“The Sentinel Glove had been Revgear’s most popular boxing glove for the last few years” Explained Paul Reavlin President of REVGEAR “However with the influence of the European Division headed by Alex Wright we made a series of modifications which truly evolved the glove into something new”.

“The S3 represents a premium glove that challenges for the title of the best boxing sparring gloves in the world today” Says Alex Wright head of the European division.  “We always thought the Sentinel was a great glove, very comfortable and providing some of the best protection on the market for both user and sparring partner but it needed a few refinements to make it more accessible to the Europeans who are often a little smaller than the Americans; We retained the weight but downsized the glove so it no longer was only a big guys glove, its profile is really slim now and we went back to a traditional wrist strap which is neat and tidy. The padded band on the wrist protects perfectly and cosmetically all the S3 are two tone with some great color options that was lacking in the older ranges, its a glove that will be copied by other brands in 2016?

“WBC International Boxing Champion Jon Lewis Dickinson who usually uses £230 Reyes gloves loves them and has been using the 18’s in his recent fight preparations, International K1 star Jamie Bates used the Sentinel and wouldn’t swap for gloves twice the price and we are seeing more and more that professionals who really know their sport are requesting the new S3? Alex Wright.

REVGEAR’s S3 is very much its own glove and while some other brands are essentially  producing copies of classics from Reyes, Everlast, Twins or Grant the #1 American MMA & Kickboxing brand has now produced a glove which is almost certain to become a modern classic in its own right with its own unique identity.