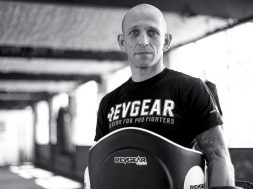 Slip and Counter with Andy Thrasher

Andy Thrasher runs us through one of his favourite sip and counter drills for standup MMA.

Veteran Nak Muay Andy Thrasher needs little introduction.  With over 85 fights under his belt and the first foreigner to win the coveted Toyota 8 Man Tournament in Thailand in 2011, Andy is a legend of Muay Thai in the United Kingdom.  He is the owner and head instructor of The Dog Pit Muay Thai in Bury, but also coaches in various other gyms across England.  Andy lived and trained in Thailand for three years, fighting out of Jittigym in Bangkok.  He came out of retirement in 2017 to defeat a tough, young opponent.

The consumate fighter and coach, Andy loves Muay Thai and strives to continue promoting it from both sides of the ropes.  Andy brings a wealth of experience to his coaching game, training his students and fighters to be as fearless as him.  When in the ring, he is a force to be reckoned with, out of it, he is laid back and professional. Here he runs us through a great slip and counter drill that is perfect for standup in MMA.

The boxer starts off by throwing a one two.  The padman throws a cross, which the boxer slips to the left.  The boxer then counters with a left hook and a right cross, before pushing the padman way with a right teep.  After throwing the teep, the boxer lands their right foot into a southpaw stance.  They finish with a left round kick.  The boxer should always be ready to defend the return kick.

The classic techniques of Muay Thai are easily applicable to the standup side of MMA.  This is a simple, yet effective drill for remaining on the offensive while slipping the counter from your opponent.

0
0   0
previous WTF DO THEY USE... A GUIDE TO WEIRD FIGHT GEAR
next SPINNING BACK ELBOW WITH MO ABDURAHMAN 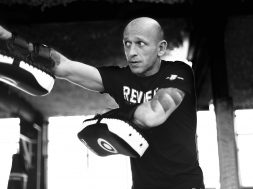 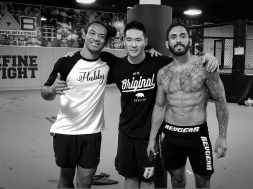