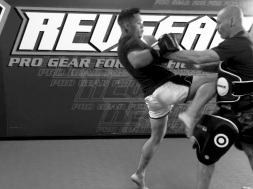 Here Victor is working the spear knee with Anthony Brancieri, who is wearing the Revgear Thai Original Belly Pad and S.H.I.E.L.D Thigh Pads.

Victor explains that the way many people throw their knee doesn’t work if the opponent retreats. He opts for his version of the straight knee (known in Thai as a khao trong): the spear knee. The motion involves throwing your knee out directly in front of you, rather than upwards. This lengthens the weapon allowing you to catch your opponent, no matter whether he moves backwards or not.

The combination that Victor uses here starts with the double jab to check his distance, followed by a cross and a lead uppercut, a low kick and finishing with the spear knee. The hands set up the low kick, that forces your opponent to stay planted on the spot, allowing you to throw the powerful spear knee and score good points, inflicting damage at the same time.

Check out Victor’s other videos on fighting taller opponents, the question mark kick and the powerful low kick. For more great striking techniques like the spear knee, subscribe to Revgear University on YouTube and follow Revgear on Instagram to stay up to date. Revgear University is the home of some of the best athletes and coaches in the business with grappling and striking videos that will help elevate your game. 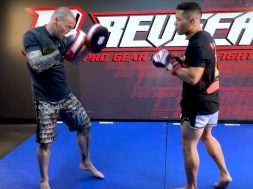 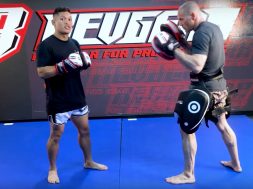