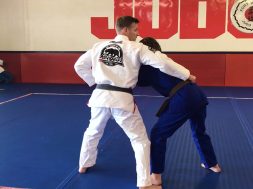 Judo and Jiu Jitsu share a common root, but as each art developed, they focussed on different elements of the grappling game. In recent years, it has become increasingly common for Jiu Jitsu players to cross train in Judo to improve their takedown game. Here, Matt shows us stickyfoot, a variation of the kosoto gari and a great, simple takedown that is a great addition to your takedown arsenal.

Most Jiu Jitsu guys will start low and deep on their heels, looking to take it to the ground quickly, so the big throws of Judo don’t work so well. The stickyfoot works great in this situation. The first thing to start thinking about are your grips. Judo players don’t just want to get their grips in, they want their opponent to not get the grips they want in. A “50-50” grip situation is not acceptable to a Judo athlete.

The move starts with a palm up cross sleeve grip. As you pull your opponent across your body while stepping in, you want to then reach over and grab them by the belt with your other hand. If you do this normally, a Jiu Jitsu player may pull guard when threatened. This is where the stickyfoot comes into play. While grabbing the belt, you hook your foot around the back of their ankle while locking your knee across the front of their shin. This means, if they do pull guard, you land in side control.

If your opponent stays standing, then you finish the throw. You put pressure down on his shoulder, pick his foot up with your leg and rotate them over your hips with a steering wheel motion, landing straight into side control.

Stay tuned to Revgear University for more from Matt, so you can level up your takedown game. 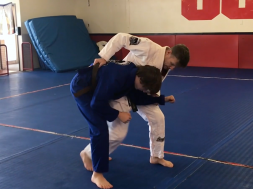 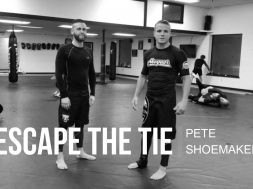 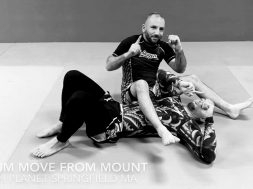